From playing on the streets of Boston to now performing in venues across the globe, the duo of Paul Wright and Tim Harrington, together known as TALL HEIGHTS, have built a career from the ground up, diligently as a relentless touring act. It’s been a journey of consistent evolution for the longtime best friends – everything from instrumentation to production to the size of their band has changed throughout the years, hand-in-hand with an ever-growing audience of listeners. Yet with all of this change, there remains a distinct DNA that courses through the entirety of Tall Heights’ music. The potency of their sound cannot be credited to harmony alone, but rather a unique union of two distinct voices that makes the music inarguably their own.

Tall Heights’ story begins just outside of Boston in Sturbridge, MA, where Paul became close friends with Tim’s elder brother. Two years Tim’s senior, Paul grew up in a family of classically-trained musicians, taking up the cello at a young age, while Tim, the middle brother of three boys, grew up in a household largely devoid of music. While Paul was a consistent fixture in Tim’s life, it wasn’t until high school, when they both took up playing the guitar, that the two began working on music together. Paul recalls, “This kid who had been my best friend’s little brother, not someone I had ever felt connected to, was suddenly my best bud with a shared dream­­­.” Tim echoes the statement, describing himself as the “eternal little brother” and musing on the disparate beginnings that eventually evolved into the musical partnership it is today.

Flash forward to 2018 and the twosome continue on their biggest winning streak yet; with 130 million streams under their belt and touring alongside the likes of Ben Folds, CAKE, Judah & the Lion and Colony House, they ­­­­now gear up for their sophomore album Pretty Colors For Your Actions. Co-produced by Oliver Hill and Steve Wall (both of whom worked with the group on their 2016 LP Neptune), the 11-track album is a sonic universe where man-made instrumentation meets grandiose, contemporary production. Stepping back from the production-heavy, synthetic palette of Neptune, (itself a reaction in part to the acoustic instrumentation of 2015’s Man of Stone), Pretty Colors For Your Actions was recorded with a live band in-studio, creating what Tim describes as, “something much more alive and tactile,” than their previous work. 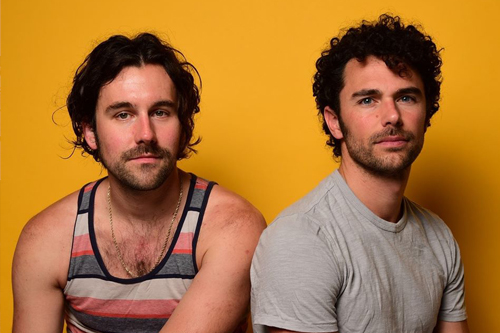